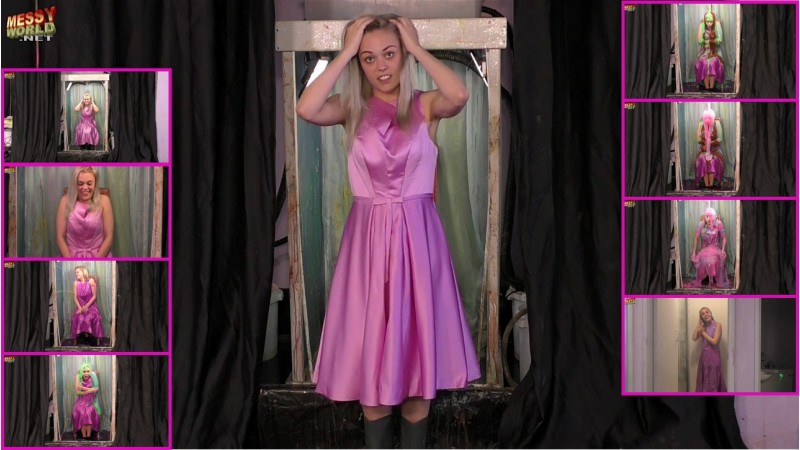 Following her first messy experience in The Human Carwash (I know, what a way to start her off), we introduced the destroyer tank and asked if she wanted to give that a go. Which having contacted us to try getting messy, obviously the answer was yes.

It was a cold evening in the studios so with the gunge being mixed en masse in the time leading up to production, it wasn't perhaps as warm as we'd have liked it to have been. However, after asking if she wanted fresh product made, she was very much, "no just get this dress destroyed" (she had donated the dress a cpl months previous). She went off to the dressing rooms and got into her pink dress which she said she wanted to have gunged (there's a backstory but we won't go into that), we put her in the destroyer to gunge her in her pink dress and it was suitably destroyed. It was a kind of therapy that could be made fun for her.  :)

The water sprinklers began and soaked her, followed by the side slime jets, then onto the overhead gunge jets and of course, the big overhead finale. Luckily, a nice warm shower awaited her and she cleaned off (eventually). As shown at the end of the video.

Jorgie loved her experience at Messyworld and said it was a bucket list item for her to be gunged in a studio like ours, yay!  :-D We never like to disappoint  x-D

The video is available now on Messyworld.net to stream alongside our entire back catalog, or you can download it as a standalone video on LXdownloads.com